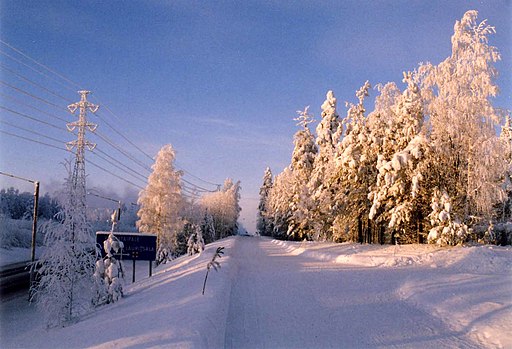 In 2015, I had the enjoyable experience of attending the Anglo Nordic Baltic Theological Conference, in Turku, Finland. Participants presented informal papers by day, and in the evening there was food, sauna, talk and not a little bit of wine.

One thing led to another, and I ended up asking Rupert Moreton, of Lingua Fennica, whether there was any public domain poetry he’d like to translate and have me set to music in exchange for some of what my patrons pay me… and as there was a call for scores coming up with a winter theme, I asked for that, too.

He sent me this translation of a poem by Eino Leino:

The sun onto sea now has mounted,
freezing ridges atop the sea,
and fall with past heroes is counted,
winter’s frost will soon with us be.

And faithlessness seeming is winning,
weakly beating my broken heart,
the tinge of leaf browning is thinning –
lengthy northerly night will start.

(See notes on the translation.)

It’s solstice today, and many people are looking forward to Christmas, or just glad the days are getting longer — and I am, too! But I also remember my childhood in Canada, how January and February would often be much colder, despite the lengthening days; how looking forward to Christmas and longer days also carried a tinge of sadness over knowing that the long slog through the coldest months still lay ahead. So today, right in the midst of winter’s night, seemed an appropriate time to post my setting.

I’ve modified the English very slightly, but also kept the Finnish; when I was setting it, I was trying to remain faithful to the differing lengths of the Finnish syllables, and I think I mostly managed to do so. I also tried to illustrate the way frost and snow come in staggered layers in a long winter, not always an even coating but thicker in some places, thinner in others. The English should be sung with the stress according to the syllables, not the bar lines.

It’s SSA a cappella, and I hope to have a good demo recording in a few weeks time. In the meantime, here are some robot flutes playing it:

You can download
the MIDI file, and the PDF, from this page, or from the Choral Public Domain Library. It’s under a CC by-SA license, as usual.

Finally, thanks as always to the lovely supporters who made it possible for me to write this music, and to support — eventually — an independent translator. If you’re not a patron and you’d like to be, sign up at my Patreon page, and if you’d like Rupert Moreton to do some translation for you, visit the Lingua Fennica site.