Earlier this summer, Song Cycle went on a day pilgrimage to Romsey Abbey.

As is often the case with pilgrimage, it didn’t go entirely to plan. In fact, my bicycle broke, and not in a way that meant a 40-minute delay by the side of the road replacing a tube, but more seriously. The frame just… came apart. Thankfully I was riding rather gently up a hill at the time, not barrelling down one as I had been a few minutes previously! I ended up getting a lift into Romsey, and then, later, so did my bicycle. 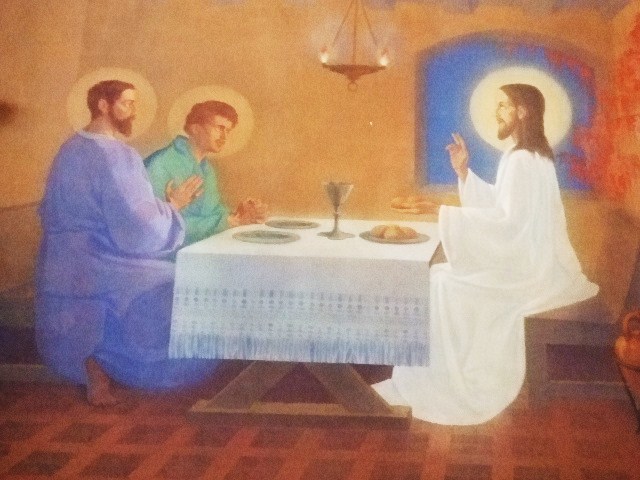 The words are by James Montgomery:

Be known to us in breaking bread,
but do not then depart;
Saviour, abide with us, and spread
thy table in our heart.

and a second, optional verse:
There sup with us in love divine,
thy body and thy blood,
that living bread, that heavenly wine,
be our immortal food.

I think these words are particularly relevant for a pilgrimage: the reference is to the journey to Emmaus, where the disciples were walking and talking with Jesus the whole time, and only realised who it was when he broke the bread — at which point he vanished (and they turned around and went all the way back to Jerusalem!). So I’ve set them as a melody which can work on its own, or can be a two-part or three-part round (though it gets a bit crunchy in three parts).

There’s a PDF in A4 and in A5 (for easier carrying on pilgrimage):
Song Cycle Sung Grace A4

And you can hear some robot guitars play it, first just by itself, then in two parts, then in three:

As usual, I’ve also put this work on the Choral Public Domain Library, and licensed it using Creative Commons Attribution Share-Alike, thanks to my kind supporters over at Patreon who make it possible for me to do this sort of thing.

This weekend I’ve been on another sort of journey. I’m visiting Aberdeen for the first time, to get to grips with the basic layout before starting my PhD. And it’s also that time of year when some of us on Twitter hold a sort of festival, called Not Greenbelt. You can have a look at the #notgb16 hashtag, or visit the notgb category on Graham’s blog if you wnat to find out more or participate. It’s a sort of home-away-from-home for people who’d like to be at Greenbelt but aren’t; and it’s also to raise money for the Big Issue Foundation.